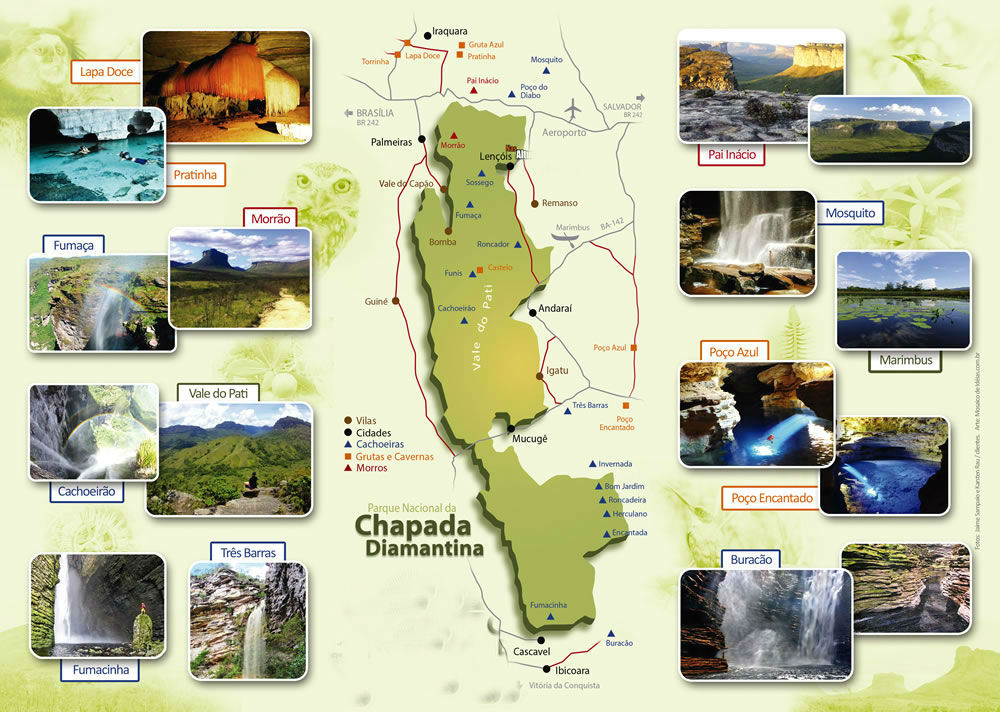 Though the map is small, the area that it details is not. Most of the shorter tours take place north of Bombo on the map, while the trekking tours with camping or overnighting in local homes are in the Vale do Pati. Other places to the south can be reached on private tours.

Chapada Diamantina is a mountain range with fascinating scenery in the Brazilian state of Bahia.  An extraordinary variety of ecosystems with the highest mountain with 1800m (5,660 ft), the whole mountain range is larger than Israel.  Chapada Diamantina National Park, established in 1985, is a jewel of  ecotourism.  The park played a key role in Brazil’s diamond boom history.  The landscape is a creation of the erosion process that the region suffered in the beginning of the pre-Cambrian period, forming towers of minerals known as ‘tepuys’, the name given by the local Indians that dominated the area.

Only a few picturesque towns grew in Chapada. Because of the mineral content, he area was used as a refugee for precious stone hunters.  Lençóis, 400km (250 mi.) from Salvador, is the main town surrounding the park and thus is the main gateway.  In the beginnings of 20th century, Brazil was the first world producer of diamond.  But with the discovery of diamonds in South Africa, many towns declined and some turned into a ghost town like Igatu.  With many ruins of old rock houses, Igatu is a beautiful resemblance of the diamond boom period turning it into an important national historical monument.  Towns like Mucugê and Lençóis have an excellent representation of colonial architecture and therefore are also a national historical monument.

​In search of diamond’s richness, many trails were opened by ‘garimpeiros’.  Tourists now use many of these trails for hiking and trekking.  The underground of Chapada is fascinating with many caves and underground rivers.  When Pratinha River leaves the underground and comes to earth, the Pratinha Cave is scarped.  With calcareous characteristics in the cave, the crystal clear water when reached by the sunrays gets a silvery tone, which names the river.  The Pai Inácio Hill a great place where a dazzling sunset can be seen.  There’s a legend that the hill was named after a slave threw himself into the abyss when his colonel chased him for being in love with his wife.
Equivalent to 112-story building, the Fumaça Waterfall looks like smoke when looking at a distance.  This happens because the volume of water is not sufficient to overcome the drop of 380m (1,247ft) and constant wind catch the falling water drops and throw it back up in a curtain of mist.  The glowing blue beauty of Poço Encantado (Enchanted Well) water is so transparent that sometimes it’s hard to identify the roof of the cave reflected on the water from the bottom of the lake.  Depending on the time of the year, a direct sunlight illuminates the lake through a natural hole in the cavern wall.  The afternoon sun reaches down to the Blue Cave-a small pool hidden under a deep rock ledge, behind a curtain of aerial roots-giving it an electric-blue tone, resulting in stunningly beautiful view.  No swimming is allowed to minimize the environmental impact.

The Ribeirão River flows in a deep sandstone valley and tumbles quickly through a narrow rocky canyon, forming spectacular waterfalls and cascades like the Sossego Falls, the last series of falls.  Nature has hollowed out some swimming holes, with crystal-clear water, in the smoothly polished rock surface of the Serrano River, just 15 minutes from the edge of town. Upstream from Poço Halley, Primavera Waterfall is a riverbed with smooth and sculpted rocks by water and beautifully decorated.  Many trails to caves, hills and waterfalls will be discovered with the best tour guides of the region.

A subterranean river forms a huge cave, Lapa Doce, with a tunnel system of 23km (14 mi.) extension and 15-20m (49-66ft) high roofs.  Large fish and aquatic plants can be admired in a good-sized lake formed by an underground river.   The minutes spend in this magical scenario that foster unique fauna in deep narrow valleys will be unforgettable.