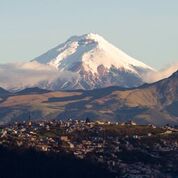 Day 2: Quito & Middle of the World
A guided tour to the historical centre of Quito is a must-see when visiting Ecuador (first UNESCO Cultural World Heritage Site). The highest capital in the world (2,850m/9,350ft; over 2.2mln inhabitants) is also affectionately known as La Carita de Dios (=The face of God), thanks to its high number of skilfully ornamented colonial churches and monasteries, including finest of South America. Its lively cobblestone squares and narrow streets are lined with the monumental facades of recently restored neoclassical mansions.
Afterwards we’ll take you to the Mitad del Mundo wich is one of the mos visitied sites in Ecuador.
The painted equatorial line of Mitad del Mundo is a popular spot for memorable images; it even crosses the altar of a small chapel. From the panoramic balcony (entrance fee not incl.) of the prominent equatorial monument (1979), you can admire Cayambe volcano (5,790m/19,000ft) on clear days, the highest and only place on Earth where the equator touches snow.
Next door to the equatorial complex of Ciudad Mitad del Mundo is the private Inti Ñan Solar museum (= ‘Path of the Sun’). It is dedicated to the ancestral worldview of various ethnic groups. Physics experiments explain gravitational effects on the equator. Try yourself balancing an egg on the head of a nail or miraculously loose your strength on the magnetic line!
Return to the city by mid-afternoon and drop off at your Hotel.
Accomodation:                 Hotel Dann Carlton or Similar
Meals:                                  Breakfast, Lunch             ​ 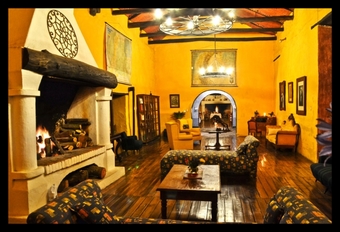 Day 4:  Otavalo Market – Rose Farm – Papallacta
Early in the morning, your prívate transfer will pick-you-up to take you to the Otavalo’s Market.
For most tourists Otavalo’s highlight is the daily handicraft market on Plaza Poncho, where skilful native merchants wait for you to play the game of bargaining on alpaca sweaters, ponchos, hammocks, pan flutes and other souvenirs. This region is famous for its woven textiles.

Afterwards, we’ll take you to visit the Ecuadorian roses that are exported all around the world. Though most plantations are strictly closed, this excursion gives you the opportunity to look behind the scenes of a rose-farm in the Cayambe area, halfway between Quito and Otavalo.

Afterwads your transport will take you to experience the most interesting place in Ecuador to relax and rest before your adventure in Galapagos. You can use the first-class facilities (dressing rooms, lockers, showers and thermoludic area with pools and whirlpool) from Spa-resort of Termas de Papallacta. It is best to switch between warmer and the cold pools, but you can also cool-down with the fresh mountain air. Optional treatments (sauna, massages, hydrotherapy, body aesthetics) preferably are reserved in advance (not included).
Accommodation:        Termas de Papallacta Spa-Resort
Meals:                         Breakfast
Day 5:  Papallacta – Quito – San Cristobal Island, Galapagos Cruise – The Galapagos Treasure  (cruise starts on Tuesday or Friday)
Transfer to airport to fly to the Galapagos
AM: Arrival at San Cristobal Airport
At San Cristobal Airport you have to pay your Galapagos National Park entrance fee and your luggage is inspected. In front of the arrival hall you will meet your naturalist guide and fellow passengers, and you will be transferred to the harbor of Puerto Baquerizo Moreno. Our inflatable dinghies will bring you the last stretch to the yacht, which is anchored at Wreck Bay.
PM: Colorado Hill (San Cristobal)
The only (unpaved) road into the highlands of San Cristobal passes the formal sugarcane plantation and penal colony El Progreso and a row of ecologic wind generators. Next it reaches the highest parts of the agricultural zone and El Junco Lagoon, one of the scarce sweet water lagoons in the archipelago. Colorado Hill is on the decent to the south coast.
The breeding centre at Colorado Hill (named Galapaguera Jacinto Gordillo) is among easiest places where you can see Galapagos giant tortoises. This and similar breeding centres on Santa Cruz and Isabela have been created to rescue these endangered giants by collecting their eggs in the wild, reproduction in captivity and repopulation once the hatchlings are big enough and less vulnerable for predators.
Around the large corral, there is also an interpretive botanical trail and an interesting visitor’s centre. In here the natural history of the local giant tortoises is explained to you; including the relationship and evolutional differences between San Cristobal sp and other (sub)species. On the trail you can spot songbirds as well, such as yellow warblers, endemic Galapagos large-billed flycatchers and the Chatham mockingbird (unique to this island), that put Darwin on track of his evolution theory.
Accomodation:                 Galapagos Treasure
Meals:                                  Breakfast, Lunch, Dinner
Day 6:  Galapagos Cruise – The Galapagos Treasure
The next island of Española is located in the far southeastern corner of the archipelago. As one of its crown jewels, this bird watcher’s and photographer’s dream offers all that you might expect from Galapagos. Enjoy the alluring Gardner Bay and walk in a distance of just a few meters past waved albatrosses, booby colonies, sunbathing marine iguanas and Galapagos sea lions and feel yourself within an exciting nature documentary! Several endemic species give you the opportunity to become an eyewitness of evolution.
AM: Gardner Bay (Española)
Make your first ‘dive’ in  Gardner Bay, and admire colorful reef fish, snorkel side by side with a Pacific green turtle, or find yourself in the middle of playful Galapagos sea lions. The striking white coral sand beach is an important breeding site for Pacific green turtles. But without doubt its main attraction is the Galapagos sea lion colony. Females stay year round in this nursery, suckling their pups up to an age of 3 years, although these start to learn fishing already after 5 months. During the breeding- and mating season the colony becomes even more populous. The strongest bachelors and elder males return from their secluded bases and start again to conquer and defend their part of the 1300m/4250ft long beach. Pregnant females choose the best territory to give birth, and will mate again with their landlord within a month.
PM: Suarez Point (Española)
Huge ocean waves bang on the southern basaltic cliffs of Suarez Point, and form a spectacular blowhole, where a fountain of sea water sprays meters/feet high into the air (depending on the tide and how strong sea breeze pushes the waves). Take a meditative break in silence on this emblematic viewpoint to convert this unforgettable moment in a lifetime experience.

Waved albatrosses soar most time of their lives far out at sea and just come to Española (March-December) to breed and nurture their huge chick. This spectacular seabird is the only tropic albatross (critically endangered species). Besides some strayed individuals on Isla de La Plata (out off the Ecuadorian coast) it only breeds on Española, where you can witness its synchronous courtship dances, which include bowing, whistling and even a stylized form of ‘sword fighting’ with their bills (especially in October)!
Suarez Point is also a massive breeding site for Nazca and blue-footed boobies, swallow-tailed gulls and red-billed tropicbirds. Blue-footed boobies don’t bother to breed in the middle of the trail. Especially during the food-abundant garúa-season (2nd half of the year) you can admire amusing courtship dances, mating, breeding, emerging from the eggs, nurturing or first flight-attempts.