Day 1. Arrival to Lima and overnight at airport hotel.

​Day 2 -  breakfast, fly to Trujillo and transfer to hotel. In the afternoon, we'll have a city tour, which will include the university museum. 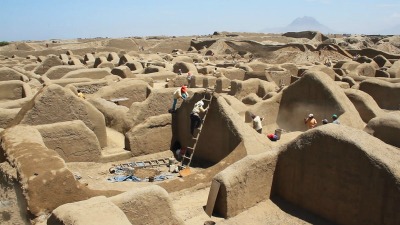 Day 3 - breakfast, then we head south of town to visit the Temples of the Sun and Moon, built by the Moche Culture in around 500 AD.  These 130-foot-tall pyramids are thought to be the largest adobe structures in the Americas. The complex sits about three miles inland, southeast of the modern city of Trujillo and is considered by many scholars to be the former capital of the Moche State The complex is dominated by two huge adobe brick buildings: the Pyramid of the Sun, or Huaca del Sol, and the artificial platform called Huaca de la Luna, or Temple of the Moon. On the quarter-mile-wide, open plain between them, researchers have found many graves, most of them looted, as well as evidence of large scale manufacturing covered by a layer of sediment up to 10 feet thick. A considerable number of administrators, religious, and manufacturing specialists must have been living at this great pre-hispanic settlement.